Posted on November 14, 2009 by tonipressleysanon

I made my way over to the Haitian Creole Institute; indeed the only one of its kind in the country. Dr. Albert Valdman just happened to be in and he and his staff graciously entertained my questions about their center and then posed for a picture.

They then sent me on my way with instructions to visit the library which is hosting a rare book exhibit of Haitian treasures. They also told me about LeGrace Benson’s art gallery talk scheduled within the next half hour. 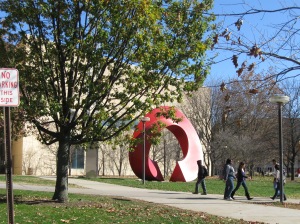 Apparently, LeGrace was visiting a while ago and was shown these pieces of art that the university gallery had owned for a while. No one knows who painted the artwork nor when they were painted.

They are absolutely lovely works of art and worthy of closer consideration. 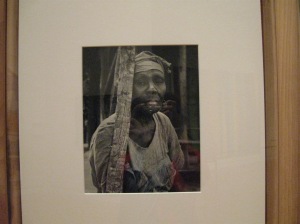 After the tour I went and checked out some of the African textiles in an adjoining room. They were quite spectacular in their own right. I couldn’t take photos, but I did get this description of two of the garments from the Grassfields area, Cameroon that I found there:

Tunics covered with small ball of human hair or quills have been associated with leaders and high ranking officials in some military and mask societies in Grassfields kingdoms. As an extension of a person hair is believed to be imbued with the owner’s strength and power. This makes it a fitting addition to a garment worn by a man who needs to use all available resources in wielding authority and carrying out his responsibilities and obligations. Likewise, the sharp points of the quills suggest metaphorically, that the wearer is of a garment covered with them is not someone to be trifled with.

I then accompanied my new friends, the Fleurants, to lunch at a little outdoor café called “Puncible Spoon”. Great name, nice location, beautifully decorated and decent service. I must say, I expected a lot more from the food. My “creamy tomato and basil soup” was chunks of tomato, no cream to speak and I think—dare I say it?—dried basil!! My grilled spinach and cheese on pumpernickel rye was much too buttery for my taste and a bit smashed, while there was a bit of spinach sticking out from between the bread slices, I couldn’t really get a sense that the cheese and the spinach were integrated. I’m not quite sure that it’s a good idea to serve tomatoes at this time of year either as they are obviously not in season at this time of year here. They just end up looking and tasting bland and watery—not very appealing. They were quite generous with the Merlot that was quite nice and did enough of a number on me to make me forget my bag on the chair (we had to go back for it later).

I had enough time to go back to my room and dump my bag in order to get back to J. Michael Dash’s talk, “Location Matters: Grounding Creolization in the Caribbean Imagination”. Though his talk was more concerned with V.S. Naipal and the authors of Eloge de la Creolité, Bernabé, Chamoiseau and Confiant, most of us in the audience were preoccupied with the way that Haiti is left out of the Creole paradigm that they set forth. A great line that Dash kept coming back to is that since the revolution “Haiti has been and continues to be uncontainable”. Love it!!

I met some very cool people at the reception that followed. I also remet my Krèyol teacher from way back when at FIU, Benjamin Hebblethwaite. He’s now an assistant professor in Gainseville, Florida. I also reconnected with Yanique Hume who does great work with performance and Gina Ulysse who is an anthropologist but also a performance artist. I convinced both of them to come down for Ghetto Biennale. Should be big fun…

Day two is about to get underway. Woohoo!

This entry was posted in 1. Bookmark the permalink.