Posted on May 2, 2010 by tonipressleysanon

My last day in Ayiti when I went downtown to say goodbye and get some final photos of Eugene’s place I passed a man doing business on top of rubble. Who knows if there are people still under there.

Francky suggested that the building that was reduced to dust had been the former site of his lottery business. That may very well be the case.

The image has haunted me since my return to the states. Somehow it didn’t feel right to just snap a photo. Today, I was finally able to paint what’s been in my head. 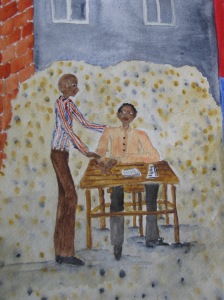 It’s called “Anlè Dekonm” (On top of the Rubble) as a play on the RaRa song, “Anba Dekonm” (complete with dance) that made its appearance shortly after the earthquake.

This entry was posted in Uncategorized. Bookmark the permalink.